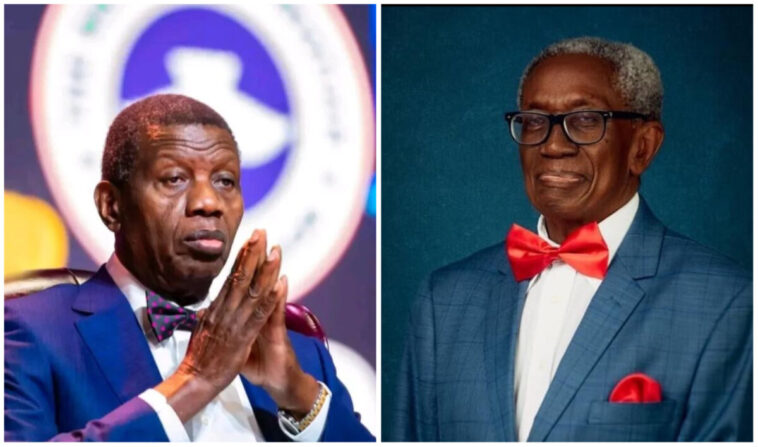 Prof. Fola Aboaba, one of the closest persons to the General Overseer of the Redeemed Christian Church of God, Pastor Enoch Adeboye has passed on.

He died in Lagos on Saturday, January 21 about 47 days before his 90th birthday after a brief illness.

Professor Aboaba was in a circle of three friends very close to Pastor Adeboye. The others are Mr. Simeon Olakunrin (SAN) and Elder Felix Ohiwerei

Until his death, Prof. Aboaba officiated regularly at special Holy Ghost Nights of the RCCG. He played the role of introducing Pastor Adeboye to the podium to minister on such occasions. He also used to sing special songs to celebrate the birthday of Pastor Adeboye.

He was the founding Pro-Chancellor and Chairman of the Governing Council of the Redeemer’s University.

A professor Emeritus of Agricultural Engineering Aboaba was a member Board of Trustees of the RCCG and also Chairman of the Technical Advisory Board and Lands Committee of the Church.

Prof Aboaba was also one of the founding fathers of the National Prayer Movement.

Announcing his death in a statement on Monday, the leadership of the RCCG said the late Aboaba served God passionately in various capacities, saying he was a distinguished elder and member of the church’s board of trustees.

“Prof. Aboaba served God passionately in various capacities and made a significant contribution to the work of God in the RCCG. He spearheaded the activities that led to the birth of The Redeemer’s University and served as the pioneer Pro-Chancellor and Chairman of the Governing Council of the institution,” the statement signed by Pastor Oladele Balogun, special assistant Pastor Adeboye, read.

According to the church, Aboaba was a member of the Annual Holy Ghost Congress Planning Committee as well as the Chairman of the Technical Advisory Board and Lands Committee of the Mission.

“As a Church, we are grateful to God for the opportunity so graciously granted him to serve God and to be a blessing to humanity. Pastor Fola Aboaba was a Professor of Agricultural Engineering and a Professor Emeritus at the University of Ibadan.

“We commiserate with the family he left behind and, we pray that God will grant them the fortitude to bear the loss,” the church added.

READ ALSO:  Legal Actions Will Be Taken against Obi for using Wizkid&#8217;s name to promote LP Concert (FOR THE RECORDS)

A Christian wake is set to take place for Aboaba on February 7 while his remains will be buried on February 8.