Tega Dominic, a Big Brother Naija alumni sets a couple of tongues wagging after she made a disclosure via her Twitter platform.

Tega, who had sparked outrage following her shenanigan with fellow ex-housemate, Pere Egbi during their season took to the micro-blogging platform, Twitter, where she shared a list of what she expects from her potential lover.

The list consists of things he expects from a loyal male friend in a relationship that would not lead to marriage.

According to her, she would love a loyal male friend, who would serve as a confidant and a companion, have kids together, and live together.

However, in all of these, there would be no legal binding.

The controversial former Big Brother Naija housemate had earlier opened up on how she deals with trolls.

For the single mother of one, she believes she’s better than anyone hiding under the keyboards to attack her.

Tega Dominic further said she handles trolls by laughing at them.

She also recounted a period when her management tweeted that her mental health was being affected and she was not comfortable with it.

According to Tega Dominic, that tweet was false and her posts were a reflection of how she felt during that period.

Tega Dominic made these statements on her talk show, ‘The Pandora Show’.

“There was a time my management made a tweet about my mental health being affected. When I read that tweet, I said to myself, ‘Me, mental health? Where is my mental health going? How did it happen?’ I told them (management) that they didn’t show me before tweeting. They said it was because they knew I would not allow them to put out the tweet. They said at that time it was the best idea to go through.

“Sometimes, I don’t forgive myself; I feel like fighting myself for that single tweet. I cannot be saying something that is not real. Anything I tweet is how I feel at that moment. I don’t think I can say I am emotional when I am not. It’s not possible.”

Tega Dominic also recounted how she and her son were bullied on Instagram, stating, “There was this time someone bullied me and my son. I went to the person’s page and realised that the person recently opened the account.

In my mind I was like, ‘This person cannot even face me with his real account and speak to me directly’. That means I am way above the person. You will never see someone who has a blue tick on Instagram bullying another person. I just gave myself courage and said, ‘This cannot be it’.

“I may be getting trolled and my assistant or sister will come to my room and see me laughing. I have fine legs and I may look at the troll’s legs and say to myself, ‘My legs are even finer and this one is talking’. There is always something to massage my ego. I have never seen trolling and bullying in my life like the past one year. The people that have been there before me, I wonder what they have been facing.” 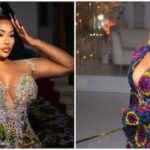 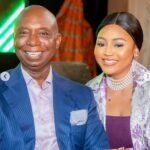