The family of Nollywood actress, Ada Ameh, has released her funeral arrangements.

Read also:ADA AMEH: 7 things you need to know about the Actress 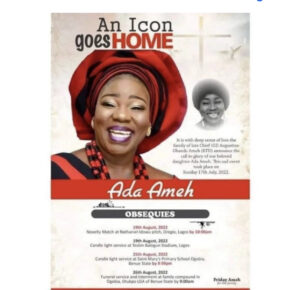 The remains of the movie star will be interred at her family’s compound on Friday, August 26.

According to several reports, the actress was said to have been a guest of an oil company’s top shot and his family when she suddenly slumped during a gathering.

She was reportedly rushed to the NNPC hospital in Warri, Delta State, where she was confirmed dead.

It would be recalled that a few weeks before her untimely death, the actress revealed that she was going through some mental health issues.

Everything is going to be fine. I have an issue right now and it is taking my life. I nor go die. We will get over it, we will get over it. I was given a job and I didn’t do the job because I had mental issues,” she said.

“Would people understand when you say you have mental issues? They won’t. They are slamming me with a bill, suing me, it’s okay.”

The movie star lost her only child back in 2020 after a surgery gone wrong.

Ameh is one of the most popular actors in Nollywood with a career spanning over two decades.

She first rose to stardom in the 1996 hit movie ‘Domitila.’

Ameh is also popular for her character ‘Emu’ in the hit TV drama series ‘The Johnsons.’ 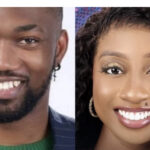 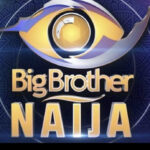