Famous Nigerian international singer David Adeleke has shown his spiritual side as he leads prayers with his followers before storming Osun streets to lead the campaign for his uncle, Ademola Adeleke’s gubernatorial election in Osun state.

The ‘Dami Duro’ crooner was spotted in the famous Ankara uniform with a title encrypted with “Imole Lokan” and the Peoples Democratic Party’s official umbrella logo.

Davido led the prayers for their safety before they commenced on the journey to campaign for his uncle.

Terry A News recalls that a few weeks ago, Davido’s uncle, Ademola Adeleke, was attacked on social media during his radio interview in a media company in Osun state.

Ademola Adeleke was captured in the viral video reading a scripted agenda on what he plans to do for the citizens of Osun state.

A Twitter user identified as comrade who shared the clip online captured the video with a mocking caption, calling on Davido to come and take his uncle away.

READ ALSO:FAN lambasts Nollywood actress, Funke Akindele over her political ambition,  asks if she would not send men packing out of Lagos like JJC

After months of pressure, @OsunPDP candidate agreed to feature on a radio programme only to come and be reading prepared script. @davido come and carry your uncle.

Nigerians who reacted to the video claimed they found no wrong in what Ademola Adeleke did during his interview.

Many believed it was the right thing to do as some recount names of those who read scripted points during formal events or programmes. 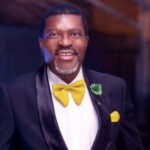