Nigerian Singer and Raper, Rema has caused a stir on the internet with his show of love to the singer, Tems.

The singer shocked many as he took to Twitter to make Tems his profile photo.

He further gushed over her as he described her as beautiful.

To add to it, Rema further revealed that he is dating Tems

This had led many to believe he is dating the female singer.

Future took to his Instagram page to share a list of the artists on his album, which was quite impressive, with Tems being the only African on it.

With top American singers like Drake, Kanye West, Young Thug, Kodak Black, and many more, Tems undoubtedly made us proud by being on the album.

“her voice was “amazing”, and it instantly connected to his soul

But actress Jemima Osunde will not have it, as she replied to the rapper, saying: 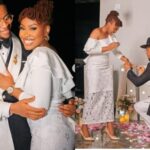