Former Big Brother Naija ‘pepper dem’ housemate, Tacha Akide has declared that she is a proud prostitute after a follower’s comment on girls that think they are beautiful.

A follower with username, Xolanle had opined that prostitution begins when a girl thinks she’s too beautiful to suffer.

“Prostitution starts when a Girl thinks she’s too beautiful to suffer.”, she wrote.

READ ALSO:Big Brother Naija ‘pepper dem’ housemate, Tacha Cries out that she wish to have a child this year

Reacting Tacha, shared the tweet and declared that it means she is a proud prostitute.

“That must make me a proud prostitute LOL”. She wrote.

Following her reply, another follower declared that everyone is a prostitue.

‘Everybody na ashawo 😂😂’, she wrote. While another stated: ‘God when? I can be a prostitute too.’

READ ALSO:BBNaija&#8217;s Bisola Aiyeola receives prayers from fans as she reveals her upmost desire to get married before she clocks 38

Tacha had undoubtedly proven once again that she was amongst the most popular names to emerge from the Big Brother reality show beating Mercy Eke to the game after American rapper, Nicki Minaj followed her on Instagram.

An excited Tacha, shared a video on her IG, bragging about not been on the same level as anyone. She also urges fans and friends not to send her any competition jabs from other housemates as she no longer in the level. 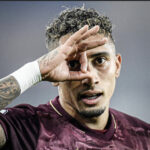