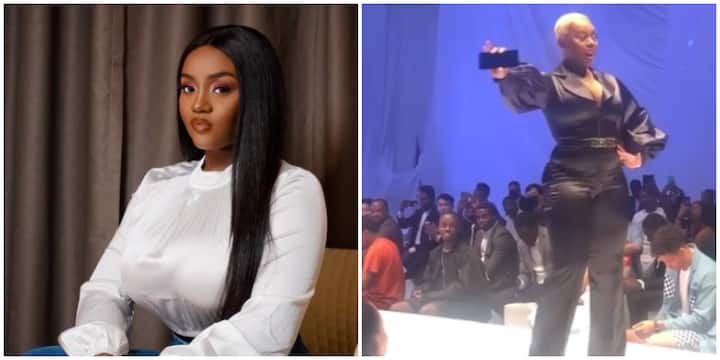 Davido’s ex-fiancee and brand influencer, Chioma Rowland, recently attended a fashion show in which she took part In videos shared on her Instagram page and also on other blogs.

The mother of one is seen walking the runway. The videos have sparked mixed reactions among fans who are in support and those who found it weird.

The video which has gone viral on social media sees Chioma who has a son with singer, Davido, strutting down the runway at a fashion show.

A post shared by The Tattle Room 🇳🇬 🌎 (@thetattleroomng)

Chioma who appeared on blonde-hair. She wore a fitted black jumpsuit with a Moschino designer belt as she catwalks down the runway, in a fun and elegant way.

However, her fans were unimpressed by her efforts and warned against Chioma walking the runway again.

Check out some comments below:

_reenen: “She looks so pressed.”

iambayoor: “Why so robotic. She’s walking funny. And the jumpsuit look too tight and not to cut to her body shape.”

ofzcouture: “Wetin chioma dey oooo …..d for at least teach am small catwalk naw……thou shall not do this again chioma dear❤️ i come in peace.”