WWE Hall of Famer Kurt Angle was scheduled to make a bunch of appearances this month, including the July 14 Pro Wrestling Night event for the Schaumburg Boomers. But due to an injury, Angle’s appearances in July have been canceled.

Schaumburg Boomers’ official Twitter handle notified followers of the unfortunate news. It also noted that the former Universal Champion will now appear at the Pro Wrestling Night event instead.

Strowman reacted to the tweet by saying it’s an honor to fill in for Kurt Angle:

“Hate to hear @RealKurtAngle isn’t able to make this but honored to fill in for him. See everyone soon!!!! #CYN,” he wrote.

Strowman was a big attraction on WWE TV for most of his stint on the main roster. The biggest moment of his WWE career came at WrestleMania 36 when The Monster Among Men beat WWE Hall of Famer Goldberg to win his first and only world title.

Strowman held the Universal Championship for a brief period before dropping it to The Fiend at SummerSlam 2020. He briefly returned to the title picture in May 2021 WWE later released him in a cost-cutting move in June. He went on to launch a wrestling promotion called Control Your Narrative along with EC3.

It’s been about a year since WWE released Strowman, and he still holds major star power. Judging by the responses he received on Twitter, Strowman’s appearance could possibly attract a large number of fans. 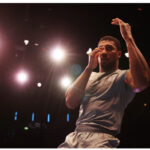