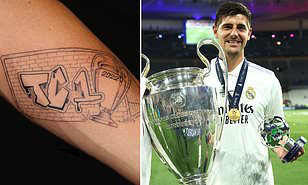 Courtois was named the man of the match following an outstanding performance as Real beat Liverpool 1-0 in the final in Paris last month.

The 30-year-old won the Champions League for the first time and he has now marked the occasion with a tattoo.

The tattoo includes a brick wall, with Courtois’ initials and squad number ‘TC1’ and the Champions League trophy guarding it.

The Dortmund star has been linked with a big-money move to the likes of Liverpool, Man City and Real Madrid.

Courtois thanked the tattoo artist Larissa, who replied: ‘For the ONE and only Champ! Thank you for giving me the opportunity to place this beautiful memo.’

In the final Real took the lead through Vinicius Junior in the 59th minute, with Courtois then making some impressive saves to preserve his side’s lead.

The Belgian made an especially impressive stop to thwart Mohamed Salah, with Real proceeding to win the game.
After the game former Chelsea goalkeeper Courtois claimed that he doesn’t get enough respect in England.

He told BT Sport: ‘I saw a lot of tweets coming my way, saying that I will get humbled today but it was the other way around.

‘I needed to win this final to put respect on my name. Because I don’t get enough respect, especially in England.

‘Yesterday I said when Madrid plays finals they win it and I’m on the good side of history. I’m really proud of the performance of the team.

‘We beat the best clubs in the world together with us. City and Liverpool were unbelievable this season. Today they were really strong.

‘Liverpool won two cups, today they were really strong, I think I played a great game and that was the difference – we had one chance and we scored it.’

READ ALSO:CELEBRITY GIST: 5 Nigerian celebrities who has talent in barbing

Courtois was especially aggrieved that a magazine didn’t name him among the top ten goalkeepers in the world.

He said: ‘There was a magazine, in March, that didn’t put me in the top 10 [goalkeepers in the world]. I don’t think they have to put me as number one but not to be put in the top 10 – it’s strange.

‘I guess it is to do with how I left Chelsea but I won twice the Premier League in England, I don’t think I ever really get recognised for it, especially after my first year with Madrid. A lot of people laughed at me but here I am as a winner so it is a nice comeback. 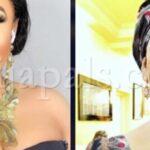