The Sierra Leone National team fought back to hold Cote d’Ivoire 2-2 in a Group E match played on Sunday evening at the on-going TotalEnergies Africa Cup of Nations 2021.

The Elephants of Cote d’Ivoire were only two minutes away from bagging maximum points, but the Leone Stars capitalized on goalkeeper Badra Ali Sangare’s error and made it 2-2 through substitute Alhaji Kamara at the Japoma Stadium in Douala, Cameroon.

It was a tense moment for Cote d’Ivoire in added time as their skipper Serge Aurier was forced to go in goal after goalkeeper Sangare was carried off injured.

After 10 minutes the Elephants of Cote d’Ivoire earned a penalty after Wilfried Zaha was knocked down in the box by defender Osma Konate. But the Sierra Leone goalkeeper Mohamed Nbalie Kamara was up to the task when he reacted well to stop Franck Yannick Kessie’s spot kick placed in the bottom right corner.

Defender Steven Caulker continued to command the Sierra Leone back line well as they stopped the Elephants attacks. After 22 minutes Sebastien Romain Teddy Haller made it 1-0 for Cote d’Ivoire. He received a neat defensive splitting pass from Zaha and made no mistake finding the net.

The Sierra Leone goalkeeper was again called to punch away N’Clomande Ghislain Konan’s shot after 33 minutes. Mohamed Buya Turay had a good chance after 38 minutes for Sierra Leone, but the Elephants’ goalkeeper Badra Ali Sangare was up to the task with a well timed block.

After recess the 1992 and 2015 AFCON champions Cote d’Ivoire intensified their attacks for more goals, but it was Sierra Leone who leveled matters after 55 minutes. Musa Kamara beat one defender and made no mistake shooting past the Cote d’Ivoire goalkeeper.

The goal motivated the Sierra Leone team as they stepped up in attack. Turay had his free kick miss the target for Sierra Leone after 58 minutes.

But the Elephants of Cote d’Ivoire did not stop attacking and were 2-1 up after 66 minutes after some good inter passing which was eventually set-up by Zaha Nicolas Pepe blasted the ball in the corner.

Cote d’Ivoire continued to attack in numbers, but the Sierra Leone defending line stood firm, clearing and blocking several balls in their territory.

With just one minute of added time to the final whistle Cote d’Ivoire’s goalkeeper Sangare failed to get hold a back pass before Kamara made no mistake sliding it in the net. It was all celebrations for the Sierra Leone team after the final whistle.

Cote d’Ivoire remained top of the Group with four points, while Sierra Leone are second on two points. Later Algeria will face Equatorial Guinea in another Group E match. 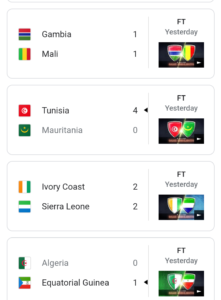 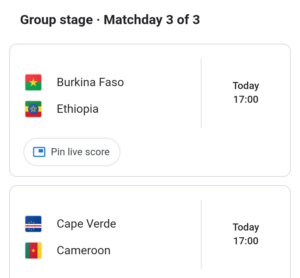 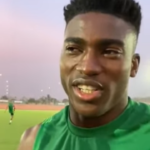 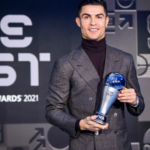