Previous Next
A new report published by Stakeholder Democracy Network, an international resource watchdog group, has said that black market fuel made from stolen oil in rudimentary “bush” refineries hidden deep in the creeks and swamps of the Niger Delta was less polluting than the highly toxic diesel and petrol that Europe exports to Nigeria. 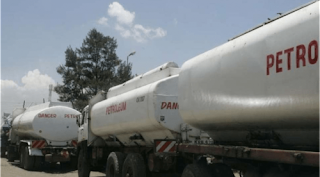 SEE ALSO
Ghanaian Woman Who Gifts Her Nakedness To Her Son For His Birthday Is Being Petitioned By Child Rights International
REVEALED: See Ajimobi’s $1.3million House In United States. Bought In Secrecy

According to UK Guardian, the organisation said it carried out laboratory analysis of fuel samples collected from 45 government-licensed filling stations and unofficial (46) fuel selling points in Lagos, Rivers and Bayelsa.
The report was titled Dirty Fuel: An analysis of official and unofficial petroleum products in the Niger Delta.
Shell, Exxon, Chevron and other major oil companies extract and export up to 2m barrels a day of high quality, low sulphur “Bonny Light” crude from the Niger Delta.
But very little of this oil is refined in the country because its four state-owned refineries are dysfunctional or have closed.
Instead, international dealers export to Nigeria around 900,000 tonnes a year of low-grade, “dirty” fuel, made in Dutch, Belgian and other European refineries, and hundreds of small-scale artisanal refineries produce large quantities of illegal fuel from oil stolen from the network of oil pipelines that criss-cross the Niger Delta.
The official samples from Lagos were said to have been collected from filling stations close to the port on the assumption that it would be “most likely to be a true representation of imported refined products”.
Laboratory results were reported to have shown that the average official diesel sample contained 204 times more fuel sulphur than the European Union fuel standards and the petrol contained 43 times more sulphur.
However, unofficial diesel samples contained 152 times more fuel sulphur than the EU standard and the black market petrol contained 40 times more sulphur than the EU standard.
In the case of kerosine, official samples were reported to have higher standards than unofficial samples.
However, the demand for kerosine from unofficial refiners was attributed to the household use of the commodity.
Consumers were reported to have shown a tolerance for lower kerosine when official sources run out of the product.
“Our research suggests that Nigeria is having dirty fuel dumped on it that cannot be sold to other countries with higher and better-implemented standards,” the UK Guardian quoted Florence Kayemba, SDN Programme Manager, to have said.
“The situation is so bad that the average diesel sampled are of an even lower quality than that produced by artisanal refining camps in the creeks of the Niger Delta.”
The Niger Delta already suffers environmental, health and livelihood impacts from decades of oil spill pollution, gas flaring and artisanal refining.
This research indicates that it not only experiences the repercussions of producing crude oil, but also in the consumption of dirty official and unofficial fuels, said the report.
According to industry sources, which track legal and illegal oil cargo movements – who asked to remain anonymous – around 80 per cent of Nigeria’s petroleum products come from the Netherlands and Belgium.
The two countries have some of Europe’s largest refineries.
“This is even more concerning at a time when Nigeria is facing an outbreak of Coronavirus.
“High levels of pollution and pre-existing respiratory and other health conditions may increase the risk that COVID-19 poses to the health of the population,” said Matthew Halstead of Noctis, which conducted the laboratory research.
www.terryanews.com
(c) July 2020