Previous Next
The absurdity of praising the dead was once again demonstrated for the late Oyo State governor Abiola Isiaka Ajimobi. The social media was literally set on fire with debate whether it was right to talk about his evils deeds as governor of Oyo State. 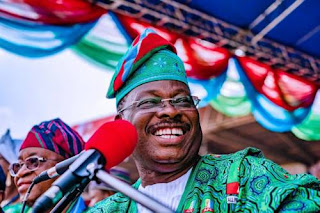 Nigerians are a bunch of hypocrites. Though they never said anything good about Ajimobi when he was alive, but heaped false praises on him at death. In truth, they are happy and relieved that Ajimobi died the way he died. “Don’t talk ill of the dead,” some people argued, “because they are unable to defend themselves.” Mark Antony in Shakespeare’s Julius Caesar bluntly reminds us: “The evil that men do lives after them. The good deeds is oft interred with their bones.”
SEE ALSO
REVEALED: See Ajimobi’s $1.3million House In United States. Bought In Secrecy
Europe Imported Fuel Lacks Quality When Compared To The Fuel Produced Illegally In The Creeks Of Niger-Delta
It’s no secret that throughout Ajimobi’s eight-year two-term as governor, he caused severe pain to Oyo State and the people. He shut down Ladoke Akintola University of Technology (LAUTECH) Ogbomosho for months. He bullied the students for having the audacity to confront the “Constituted Authority.” He engaged in juvenile street brawl with elementary school children who demanded for better education.
In life, Ajimobi was a scoundrel, a con artist, swindler, and land grabber. He was a greedy, arrogant, and corrupt governor. He criminally appropriated 48 plots of state land. He bulldozed Yinka Ayefele’s radio station simply because the radio station aired programs critical of his administration. It’s needless to bore you with the corruption and sleaze that became the trademark of Ajimobi as governor. You know them very well. You can recount them without scratching your heads.
Ajimobi’s record should include the good and the bad things he did. We should desist from writing glowing deeds of the dead. Remembering the deeds of the dead should be honest, truthful, and downright damning appraisal of his legacy. We should have the courage, the conscience, and the confidence to talk about Ajimobi’s strengths and weaknesses so we can learn instructive lessons from them. We should not sugar-coat the evils done by the dead.
We cannot make a silk purse out of a sow’s ear. A bad person is a bad person. The evils done by Ajimobi cannot be erased by death. If Ajimobi wanted people to say good things about him at death, he would have done good things when he was alive.
Death is a universal debt we will all pay. Death will come when it will come. Enough of the false praises for Governor Isiaka Ajimobi. Let’s give accurate and credible account of his life and times.
www.terryanews.com
(c) July 2020