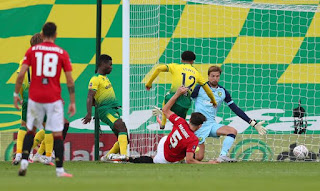 United took the lead in the second half through Odion Ighalo but were pegged back when Todd Cantwell beat Sergio Romero from distance.

Norwich were reduced to 10 men after Timm Klose was sent off for hauling Ighalo back after the Nigerian had been played in on goal by Bruno Fernandes.

United used all six substitutes during the match, with Marcus Rashford, Mason Greenwood, Paul Pogba, Nemanja Matic and Brandon Williams all coming on in normal time.

Anthony Martial was United’s sixth substitute in extra time and was bright, but it was Maguire who was United’s matchwinner as he slammed home from close range as the game edged towards the 120-minute mark and a tense penalty shoot out.

Solskjaer said his decision to make so many changes was as his fringe players needed minutes in their legs. Ten of the 11 started in the last round against Derby County but they struggled to shake off the rust against the Premier League’s bottom side.

“We’re really happy with going through, Jesse [Lingard] and the others that hadn’t played and needed another game, they needed minutes to get the sharpness back and in that respect, this worked out really well. The difference between training and games, the competitive edge will help them in the next few months.

“This team, they played together against Derby in the last round, it took us too long to get into the rhythm of trusting ourselves passing between the lines, one and two touches, we moved the ball a little bit too slowly. We kept prodding and we got the goals we needed.”

Ighalo opened the scoring at Norwich City and challenged for the loose ball that was finished by Harry Maguire for the late winner in extra-time.

Loanee Ighalo now has five goals in four United starts and his loan extension allowed Solskjaer to rest Martial, who came on in extra-time as United went to two up front after Norwich defender Timm Klose was sent off.

This is what Solskjaer told the BBC:

It’s great to have the option to rotate. Anthony has done really well, Anthony came on and did brilliant, created chances. But Odion gives me a chance to rest Antho and is a proven goalscorer.

“And today he has played a part in both goals and is great to have around the dressing room.”