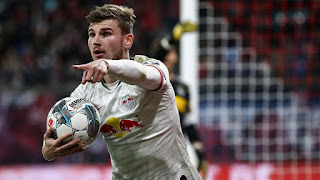 According to a SKYSPORT reporter Kaveh Solhekol, Chelsea have agreed a deal in principle to sign Timo Werner from RB Leipzig.

The Germany international striker has a €55m (£49.4m) release clause which expires on Monday June 15.
Chelsea have offered a £200,000-a-week contract to Werner,who is also interested Liverpool and Manchester United.

That allowed Chelsea to move in for their number one forward target, and the 24-year-old is happy to play for Frank Lampard’s side. His priority has always been to sign for a Champions League club where he can play regularly.

Werner is set to join Hakim Ziyech, who is joining from Ajax for £33m on July 1, as new additions at Stamford Bridge this summer following their transfer ban being lifted by FIFA in December last year.

Chelsea were unable to sign players last year and opted not to bring in any acquisitions in January, instead focusing on their main targets this summer.

The club are also interested in bringing in a new left-back, with Leicester’s Ben Chilwell their number one target. 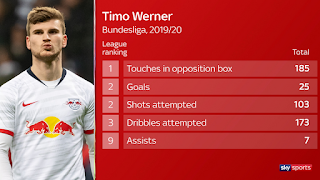 Analysis: No more surprise Werner in such high demand 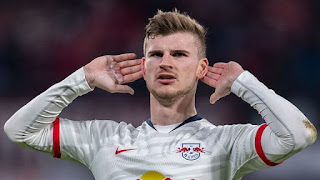 ‘Werner versatility makes him well worth the price‘
Werner has scored 31 goals in 40 games this season
Sky Sports’ Alan McInally, who won the Bundesliga in 1990 with Bayern Munich says:
“He’s a really good player and £50m in the world of football nowadays is as good a price as you’re going to get for a player who has so much potential. What he has is a versatility, but he doesn’t just play through the middle – he can play in a wide area and cuts in.
“He was playing as an out and out centre forward at Stuttgart and it was only under Julian Nagelsmann at Leipzig where he was put out wide in a game against Bayern Munich to try to counter Bayern’s wide players. He’s very quick and showed his ability and versatility from there.
“Chelsea have some really good young players but I don’t see a problem with him coming in. I thought he’d end up at Liverpool given the German connection, but it will be a case of who Chelsea look to play alongside him.
“There’s been more responsibility put on him this season and he’s responded. He has sometimes even played in a No 10 role which again has shown his versatility.
“If £50m is going to be his price, that’s going to be money well spent. I think he will easily score 20 goals in a season for Chelsea.”