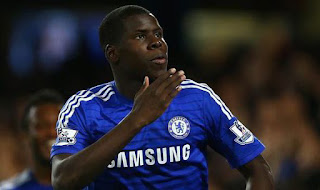 According to The Mirror, Tottenham Hotspur will have to pay £25 million as transfer fee for Chelsea central defender Kurt Zouma.

It has been reported that Tottenham head coach Jose Mourinho wants to sign Zouma in the summer transfer window.

The former Manchester United boss worked with the France international centre-back at Chelsea.

Spurs are looking to sign a new defender due to Jan Vertonghen’s contract running out at the end of this month.

According to The Mirror, Zouma is rated at £25 million by his club and Tottenham’s London rivals Chelsea.

Zouma has been on the books of Chelsea since 2014 and is a very good central defender.

According to WhoScored, the 25-year-old has played 22 times in the Premier League and six times in the Champions League for the Blues so far this season.

During his loan spell at Everton last season, the Frenchman made 29 starts and three substitute appearances in the league, scoring two goals and providing two assists in the process.