Previous Next
Ariwolo Olamide Temitope, a Nigerian lady who was barred from boarding an evacuation flight to Nigeria, has been found in a prison in Lebanon after three weeks of her location being unknown, SaharaReporters has gathered. 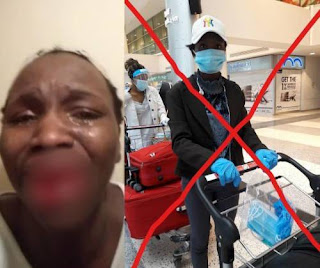 Recall that Temitope was listed for repatriation from Lebanon on May 26, 2020, but was stopped from boarding by the Lebanese airport management after receiving orders from her owner in Lebanon.
Since then, her whereabouts has been unknown with her mobile phone confiscated.
SEE ALSO MISSING BOY: Prophet Babatunde’s Phone To Be Used Against Him In Court As Defence Opens Case Next Week
SaharaReporters has learnt that Temitope is being detained in a prison in Lebanon on a false charge of attempted murder.
Sources in Lebanon revealed to Saharareporters that she is being framed up for attempted murder by her boss in Lebanon who prevented her from returning home.
The sources revealed that Temitope’s boss was making efforts to convince the government to ensure Temitope does not return to Nigeria alive.
“Charges of attempted murder have been brought against her and she is in prison. This is a very big scandal,” the sources said.
Temitope has a slim chance of being freed as the Nigerian Consul General in Lebanon is not making efforts to ensure her freedom.
SaharaReporters also learnt that thousands of Nigerian women are presently stuck in Lebanon at the moment – with no work, no money and no food.
Most of them are abused and made to work as sex slaves.
The Kafala system, widespread across Lebanon and parts of the Middle East, grants employers a large say over the fate of domestic workers, who have few rights.
Temitope had, in an interview with Aljazeera in April, explained that she had been set up by her employer, Mahmoud Zahran, who accused her of stealing a phone while she spoke to her family in Nigeria on 25 April.
After receiving a blow to her mouth, she took a video of herself.
Temitope said that the family turned against her when she refused Zahran’s advances shortly after arriving at their home in October 2019.
Zahran’s family has denied the claims but the Lebanese authorities have banned him and his wife, Feyzeh, from hiring domestic workers and launched a criminal investigation into the allegations.
Temitope fled after the assault and contacted the Nigerian Embassy, which arranged for her to leave on the emergency evacuation flight but was barred from making the trip back to Nigeria.
Source: SaharaReporters
www.terryanews.com
(c) June 2020