Nigerian singer, Solid Star has shocked his fans by setting the contract agreement he had with his former record label, Achievas Entertainment on fire. 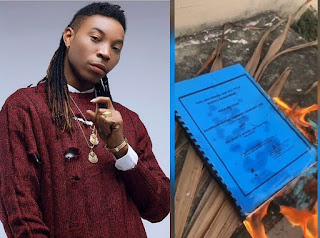 He took to his Instagram stories to share the videos of himself burning the contract agreement two years after he left the label following their strained relationship.
Solid Star, who released two albums, ‘One In A Million’ (2010) and ‘W.E.E.D’ (2016) under the record label left in 2018.
At that time, he announced that: “I Joshua Iniyezo aka Solidstar, wish to use this opportunity to thank my former label Achievas Ent for being there for me over 10 years. Words cannot express how grateful I am, Special S/O to @ossyachievas @colepeter my bosses, and the entire team for having my back. You are still my family even as I begin another chapter career-wise.” 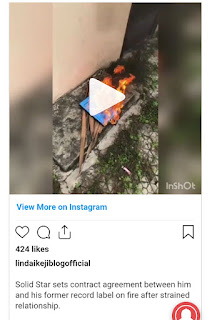 Responding to his announcement, the record label claimed they parted ways amicably after ten years together, but noted that all Solid Star’s recording audios, music videos, remain their property.
But earlier this year, Solid Star and his former label boss, Paul Cole Chiori ( Ossy Achievas), fought dirty on Instagram.
The singer called out his former label boss, Ossy Achievas, and accused him of always wanting to see him sad.
Ossy Achievas, who also fired back at Solid Star, alleged that he did not generate 10% of the N100m he invested in his career from 2007 to 2017, a claim which the singer denied and said he actually made more than 200 million Naira for the record label.
Since leaving Achievas Entertainment, Solid Star has been operating under his own label, Shaba Entertainment.
Source: lindaikejiblog
www.terryanews.com
(c) June 2020