Tottenham and England football star, Dele Alli has been handed a one-game ban by the Football Association for his controversial social media post he made about Coronavirus outbreak as he mocked an Asian man. 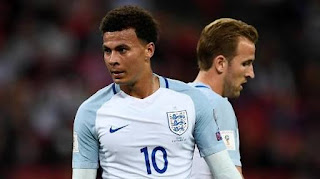 Back in February, the 23-year-old midfielder posted a video on snapchat where he appeared to film a man of Asian descent, along with the caption ‘Corona whatttttt, please listen with ­volume.’

The next part of the Snapchat story showed a bottle of handwash, accompanied by the caption: ‘This virus gunna have to be quicker than that to catch me og.’

After an investigation into the case, he will now miss his team’s Project Restart opener against Manchester United a week on Friday after disciplinary chiefs slapped the midfielder with a one-match suspension and £50,000 fine and ordered to undertake a face-to-face education course following a breach of FA Rule E3.

An FA statement read: “Dele Alli has been suspended for one match with immediate effect, fined £50,000 and must undertake an education course following a breach of FA Rule E3.

“The Tottenham Hotspur FC player denied that a social media post breached FA Rule E3(1), as it was insulting and/or improper and/or brought the game into disrepute, and constituted an “Aggravated Breach”, which is defined in FA Rule E3(2), as it included a reference, whether express or implied, to race and/or colour and/or ethnic origin and/or nationality.

“However, it was subsequently found proven by an independent Regulatory Commission.”

According to the FA, Alli said that he “very quickly realised that [the video] may have the potential to cause upset because no one should be making jokes about people all over the world catching coronavirus, especially when people have lost their lives as a result of it”.

He added that he “understands even on his private account it was an insensitive video to share at a time when many others are suffering”.

The attacking midfielder said: “In response to the FA decision, I would like to apologise again for any offence caused by my behaviour.

“It was an extremely poorly judged joke about a virus that has now affected us more than we could ever have imagined.

“I’m grateful that The FA has confirmed that my actions were not racist because I despise racism of any kind.

“We all need to be mindful of the words and actions we use and how they can be perceived by others.” Tottenham star, Dele Alli to miss Manchester United clash through suspension over the ‘racist’ video he posted mocking an Asian man over spreading COVID-19