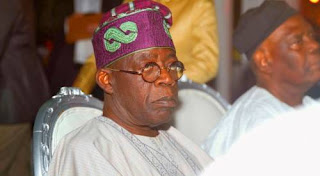 Tinubu, a two-term governor of Lagos State, had been courting President Buhari and the cabal — a group of power brokers at the Aso Rock Villa led by late Chief of Staff, Abba Kyari — with the hope of clinging the APC Presidential ticket come 2023.

Tinubu had strategically imposed his loyalist, Oshiomhole, a former labour movement leader in Nigeria, as APC Chairman hoping that he will pave the way for him to obtain the APC ticket for the 2023 presidential election.

Oluwo Of Iwo, Oba AbdulRasheed Akanbi To Be Dethroned, As His Criminal Pasts Uncovers. Served Jail Term In The US… SEE DOCUMENTED PROOFS

Tinubu had also convinced himself that by surrendering his loyalty to President Buhari and the cabal he would be able to curry the favour of the Northern parts of Nigeria for his presidential ambition.

However, Tinubu’s hope of becoming the President was absolutely dashed on Wednesday as Buhari rejected the Tinubu-Oshiomole political structure in the APC.

In a derisive statement issued via Twitter on Wednesday, Senior Special Assistant on Media and Publicity to Buhari, Mallam Garba Shehu, said, “The President has received very convincing advice on the position of the law as far as the situation in the party is concerned and has determined that the law was on the side of Victor Giadom as Acting National Chairman.

“Because he will always act in accordance with the law, the President will be attending the virtual meeting Giadom called for tomorrow afternoon.

“We urge the media to stop promoting manufactured controversies and to not give any further room for mischievous interpretations of the law on this matter.

“In addition to the President, the Giadom meeting will, hopefully, be attended by our governors and leaders of the National Assembly.”

SaharaReporters exclusively gathered that on Tuesday, Tinubu made frantic efforts to visit President Buhari at the Aso Villa without luck.

A source claimed that a jet was revving at the Lagos airport to convey the “National Leader” to Abuja at the time.

However, Yusuf did not allow the telephone conversation between Buhari and Tinubu to happen, making it impossible for the former Lagos State governor to travel to Abuja to see the President.

The root of the divide within the APC is about the party’s choice of candidate for the 2023 presidential election.

POLITICS: Oshiomole Used His Mouth To Scatter His Party, We Should Learn From His Downfall – SARAKI
DANGOTE CEMENT Offloads 3000 Workers Without Prior Notice Or Due Process

Sources say the political attack on Tinubu is aimed to first strip him of his national influence, after which his political influence would also be decimated in Lagos State, his perceived stronghold in a fashion similar to Senator Bukola Saraki’s dethronement in Kwara known by the name “Otoge”, which in Yoruba simply means “Enough is Enough”.

Tinubu had decisively battled anybody opposed to his presidential ambition or, who shows interest in the 2023 presidency.

Recently, Rauf Aregbesola, a close ally of Tinubu and a minister in the Buhari regime, lost favour with Tinubu after information filtered that Aregbosola could contest the 2023 presidential election as a Vice Presidential candidate to an unnamed politician.

Tinubu immediately disbanded Aregbesola’s groups in Lagos State, boasting that the former Osun governor was his boy and that the Lagos structure remains undivided.

Tinubu and Oshiomhole had also forced their way through to impose Abiola Ajimobi as Deputy Chairman, South West of APC.

However, Ajmobi has taken ill and remains in a coma at a Lagos hospital.

SaharaReporters had exclusively reported how Ajimobi’s health is failing him despite a series of medical treatments applied to save his life.

This development is coming on the heels of the bitter division that is mounting up even in the Lagos APC, Tinubu’s stronghold.

Sources informed SaharaReporters that the deceased Lagos Senator, Adebayo Sikiru Osinowo also known as “Peperrito”, was plunged into severe health challenges, leading to his death because Tinubu turned his back on him, placing more value on Lagos Speaker, Mudashiru Obasa.

SaharaReporters had exclusively done series of investigative reports on the financial scandal of Obasa.

However, Obasa remains a strong ally of Tinubu.

The hope continues to dim by the day for Tinubu’s presidential ambition.