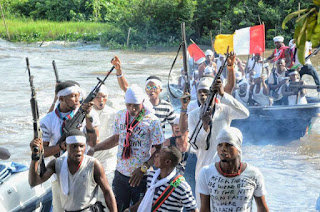 Ondo State ex-militants threatened to resume their hostilities against state government for breach of agreement and for  failing to include them into the amnesty programme of the Federal Government after they had already surrendered their arms.
The ex-militants last year surrendered their arms to the state government on the promise that they would be included into the amnesty programme of the Federal Government but they alleged that after one year the government had failed to fulfill its promise.
To this end, the aggrieved ex-militants vowed to return to the creeks to resume their criminal activities.
Speaking on behalf of the ex-militants, a leader of the group, Mr. Ogailo Ibory, in a statement said the group was tired of the alleged unfulfilled promises of the state government.
According to him, the group will not allow any political activities to happen in Ilaje and Ese-Odo Local Government Areas of the state if the government failed to make them benefit from the amnesty programme.
He said, “Last year, we heeded to the appeal of the Ondo State Government through the Deputy Governor, Mr. Agboola Ajayi, and the Commissioner for Lands and Housing, Donald Ojogo, who came to the creeks to free the six Epe students we kidnapped in protest.
“That time, the two of them promised to work out amnesty for us and we thereafter agreed to drop our guns. Up till now, we have been abandoned and no one is talking to us, they have used and dumped us in the creeks and since last year, amnesty is not coming.
“We are using this medium to request the Ondo State Government to kindly return our guns that they took from us since last year within the next 21 days. We are very serious and we are prepared for anything that will follow.”
The ex-militants threatened to cause chaos in the riverine communities of the state if the government failed to return their arms to them within 21 days.
However, the Chairman of the publicity subcommittee of the state amnesty programme, Mr. Donald Ojogo, appealed to the ex-militants to bear with the state government, saying the matter would be resolved very soon
www.terryO.com © August 22, 2018